The Axolotl is a native organism to Lake Xochimilco and Lake Chalco, both situated just underneath Mexico-City. These lakes were artificially drained ever since the Aztec era, because the nearby cities wanted to stop the seasonal flooding from the lakes and create some space to expand their towns. Because of this human intervention over the years, the Axolotl is now an endangered species in nature. Luckily, it will surely survive as a species in the lab, due to its amazing attributes and abilities, ranging from neoteny (sexually maturing in their juvenile form) to the astonishing power to regrow amputated limbs and organs.

HOW DOES IT WORK?

After a limb has been amputated, the leftover cells lose their individual characteristics. They become pluripotent-like cells, like stem cells. These cells then create a blastema, which is a rounded cover on the wound where the new stem cells congregate. This structure then develops into a fully functional limb, with no sign of the previous damage. 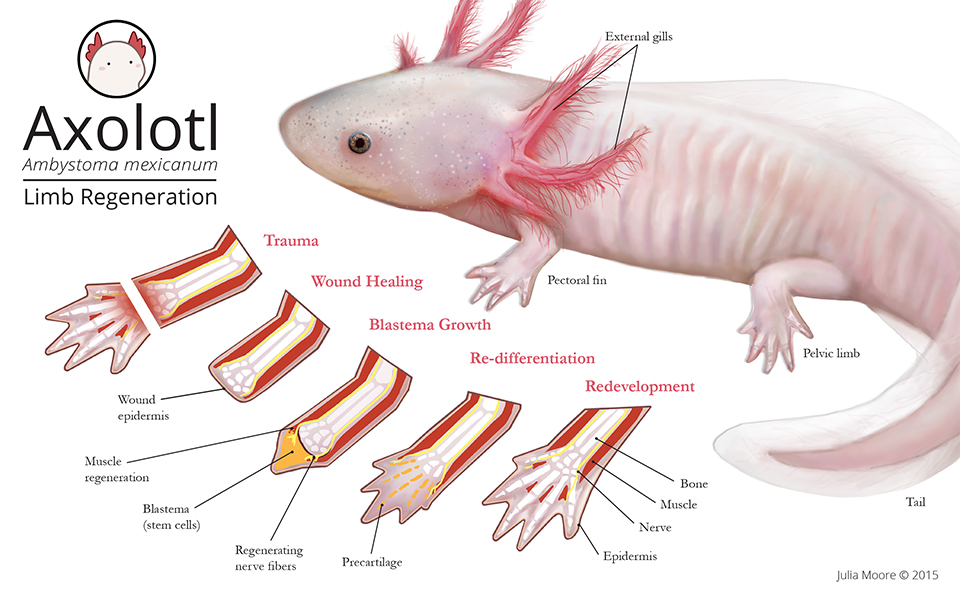 Prof. Stephane Roy (University of Montreal) studies the regenerative power of axolotls, and finds it unbelievable how much damage the species can recover from: “You can cut the spinal cord, crush it, remove a segment, and it will regenerate. You can cut the limbs at any level – the wrist, the elbow, the upper arm – and it will regenerate, and it’s perfect. There is nothing missing, there’s no scarring on the skin at the site of amputation, every tissue is replaced. They can regenerate the same limb 50, 60, 100 times. And every time: perfect.” On top of that, the axolotl is also over 1,000 times more resistant to cancer than mammals.

Researchers discovered through experimentation that there are multiple features responsible for this amazing ability to regrow limbs, including macrophages, TGF-β1 and P53. In multiple studies researchers removed one of these compounds from the axolotl and found that regeneration would occur in a slower rate, or that the limbs would not regrow at all and form scar tissue. This indicates that all three compounds play a role in this regeneration process.

Studying this phenomenon has already allowed scientists to gain insights on regenerative processes, but implementing it with synthetic biology may enable us to find a way to engineer the ability to regenerate into our own bodies. This will give amazing opportunities to patients with burn wounds, amputees, and paralysed persons, as the consequences of these disabilities would only be temporarily. Aside from this, the regeneration could bring a higher resistance to cancer in humans, just as the axolotls have a higher resistance towards this. The reason is simple: cancer is just a cell that had a mistake in it and therefore won’t stop reproducing. When we change our entire cell and structure regeneration system, we would rule cancer out as well. Prof. Roy says: “I believe that this is possible. All of this could happen within the next 10 to 20 years. One day, we will succeed!”

People often refer to the axolotl as “the walking fish”, while it’s actually not a fish but an odd form of an amphibian. Normal amphibians undergo a metamorphosis in which they swap their gills and aquatic life for lungs and take to the land, but axolotls don’t have this metamorphosis and stay in the water for their entire life, which sort of makes them a fish. Confusing, isn’t it?

On the head of an axolotl, you can see 6 bright pink branch-like parts (see picture). These are actually the gills of this organism.  In the larvae and juvenile phase, most amphibians have external gills. They lose them when they become sexually mature. External gills in sexually matured amphibians are therefore not that common, but axolotls stay in their juvenile form while being sexually mature, which gives them this characteristic pink headdress of gills. Another species that has these external gills are certain types of lungfish.

Due to research in labs, we know that axolotls are 100% accepting of organ transplants and will not reject the new organ. The transplantations are not limited to organs such as livers and intestines. Axolotls can survive full head transplants, with the transplanted head developing as if it was a ‘normal’ head. When a head was transplanted to the back of another axolotl, the head behaved independently from the ‘host’ axolotl, implying that the donor head keeps the consciousness of the original axolotl body. Creepy, huh? Sadly, we couldn’t find a picture of this phenomenon…